Anise plants grow about 18″ tall and produce umbels of lacy white flowers in mid-late summer. The lower leaves of this plant are round, while the upper Ieaves grow more feathery. It is a frost-tender annual. If planning to harvest seed, it needs about 120 days until harvest.  However, if you are growing it for the caterpillars then that won’t matter. 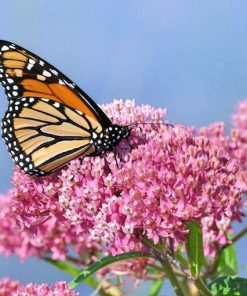