Meadow blazing star is a North American native wildflower that has a range from Alberta to New Mexico and East to Wisconsin and Missouri.

This is a slow growing (for its first year), herbaceous perennial that is hardy in USDA zones 3-7.  It grows 36-60″  tall and spreads about 15-18″ wide.  The beautiful, rose-purple blooms are present from July to September (after the second year of growth).

The Liatris Ligulistylis blooms in late summer, on tall stalks with the flowers at the top opening prior to the ones at the bottom. It is a good idea to pair this plant with Showy Milkweed (Asclepias incarnata) and Prairie Milkweed (Asclepias sullivantii), as these are the exclusive host plants for the Monarchs.

Besides the Monarchs and other species of butterflies (such as Swallowtails, Sulphurs, Skippers, Fritillaries, and Red Admirals) there are also bees and hummingbirds attracted to the meadow blazing star.

The seeds produced by this plant are sought after by different birds, especially Goldfinches.

Even though there are other different species of Liatris, this is the only one regularly visited by Monarchs.  The others just won’t do!

The light requirement for this plant is full sun to part shade.

Propagation practices include from seed (which is slow to establish) or by division.  It should be divided during spring or autumn.

Once the blooms fade away, look for seed pods in their places.  Remove them promptly (or they will get devoured by small birds) and allow them to dry completely (out of direct sunlight). They should be cleaned as well as possible and stored in a dry, cool place.

Seeds will germinate best with a 30-60 day cold stratification.  They can also be fall planted.  When starting seeds indoors, barely cover or press into the soil for contact with moisture.  Some exposure to light is beneficial.  Seeds should germinate within 1-2 weeks.

Meadow Blazing Star is a Monarch magnet!  It also has the benefits of being native, hardy, showy, and attractive.  It could be planted as part of borders, informal/cottage gardens, prairie plantings, and short grass meadows.  Migrating Monarchs can practically cover Meadow Blazing Star during their Southern flight. 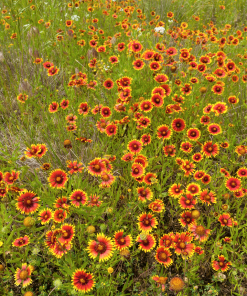