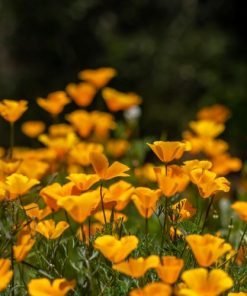 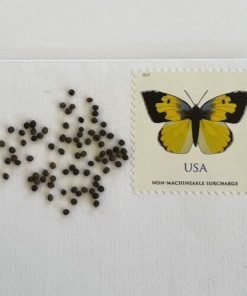 Native to much of the US

Perennial in USDA zones 8-10, acts as annual in others

Orange flowers bloom primarily in spring, but will continue through summer, fall, and winter in some climates

Don’t let its name fool you! California Poppy (also called Gold Poppy, California Sunlight, and Cup of Gold) is native to the majority of the US. However, it more than earns its title as California’s state flower, not only by its beauty but also by acting as a host to several western butterflies: Acmon Blue, Mormon Metalmark, Pacific Dotted Blue, and Veined Blue.

Though its stunning golden flowers don’t offer much in the way of nectar for butterflies, Eschscholzia californica has abundant pollen that is highly attractive to both honeybees and native bumblebees. If you take a careful look, you may even be able to find bees catching some Zzs, curled up in the petals and coated in pollen.

The vibrant orange blooms of California Poppy first appear in spring but often continue throughout the summer and fall in moist climates. If you live in a hot, dry climate, you’ll notice them going dormant in summer, though they may re-emerge in a moist and mild fall or winter. Watch closely, and you may be able to see how they open during warm, sunny days and close up at night or in cold, cloudy weather.

If the talk of summer dormancy has you worried, don’t fret. Eschscholzia californica is a low-maintenance, easy plant. It thrives in hot climates and loves sandy, poor soil, though it will still grow well in average garden conditions.

California Poppy is very drought-tolerant and doesn’t like to be pampered or over-watered. Deer avoid it, and though rabbits will nibble, they rarely cause much damage. It doesn’t mind coastal saltiness or growing in containers. The only things it will not tolerate are shade, being transplanted after established, and poorly drained soil.

This short-lived perennial is hardy in zones 8-10, acting as a self-seeding annual in the rest of its range. Eschscholzia californica can be somewhat weedy in many climates. Deadhead spent flowers to encourage more blooming and prevent re-seeding.

California Poppy is as easy to start from seed as it is to grow! Seeds can be directly sown in spring after all danger of frost has passed with no pre-treatment. If you have a shorter growing season and want to get a head start, you can start them indoors 2-3 weeks before your estimated last frost date. In zones 6-10 they can even be fall sown. Just lightly press the seeds into soil and do not cover, as they need light to germinate. Keep moist. Space plants 2 feet apart.

Brighten Up Your Garden With This Vibrant Flower

As a host to several butterflies and favorite food source for bees, the bright, easygoing California Poppy will be right at home in your butterfly, pollinator, or native garden!