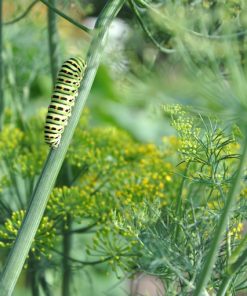 Dill (Anethum graveolens) is a wonderful herb, from the celery family, for attracting Black and Anise Swallowtail butterflies to your garden. It’s a popular host plant, meaning that the adult female butterflies will lay their eggs on it to feed their caterpillars. Dill seed and leaves are very popular as a culinary herb in many dishes, dressings and dips–if the caterpillars don’t eat them all!

Although most likely originating in the Mediterranean, dill has naturalized in parts of Europe and North America. Dill is grown around the world not only for culinary use, but also for its attractive feathery foliage and umbels of yellow flowers.

Dill is an annual that usually grows around 2-3′ tall. It is erect, with feathery fern-like leaves. The large umbels of yellow flowers that appear in late summer are a bit unusual (for an herb) in that they don’t produce a lot of nectar. This makes dill a much better host plant than a nectar plant.

Anethum graveolens likes full sun and tolerates poor soil, but prefers fertile soil with consistent medium moisture. It can handle dryness but may bolt earlier than normal. Dill does not like hot weather and so does best in cooler climates, or in spring/early summer in hot climates. Partial shade in hotter climates helps. Dill also grows well in large, deep containers.

How to Start Dill Seeds

Sow dill seeds about 1/4″ deep directly outdoors after the danger of frost has passed. Germination takes place in about 1-3 weeks at 60-70F. Thin to about 1 ft apart. Dill can also be started indoors several weeks before your last frost.

Dill is a favorite of Black Swallowtail Caterpillars! This is an attractive and tasty herb to share with them–especially if you are in a cooler summer climate! 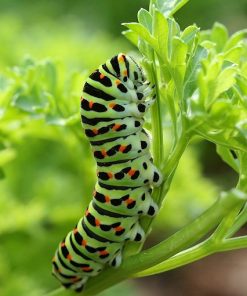 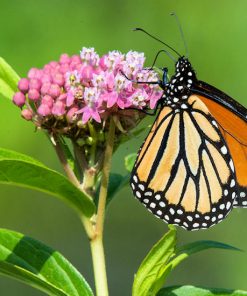